Join us for the Winter 2022 Seminar Series at 4pm on Mondays. Recorded Seminar presentations will be posted on this page as they become available. The seminar series schedule is posted below for upcoming seminars. Please note that since we are in a transition phase some of the presentations will only be available in virtual format to accommodate off-campus speakers. In-person seminars will take place in ALS room 4000 and a Zoom option will be available for all in-person seminars. Please register in advance to attend the seminar.

Amin Nouri was born and raised in northwestern Iran. He received his bachelor's degree in soil science from Urmia University. He received his master's degree in soil erosion and conservation from Ankara University in Turkey. In 2014 he moved to the USA as a family to start his Ph.D. in soil physics at the University of Tennessee. After two years of postdoc appointment at the University of Tennessee, in July 2020 he started his second postdoc at OSU HAREC.

November 8, 2021 - Romp of Otters - Potential for "Updated" Heirloom Barley Varieties and Impact on Base Malt and Beer Flavor 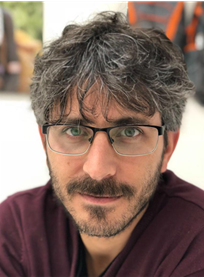 Maoz Dor is a postdoctoral fellow in Dorthe Wildenchild's group at Oregon State University's School of Chemical, Biological, and Environmental Engineering. He received His MSc and PhD in Soil Science from the Hebrew University of Jerusalem, Israel. The focus of Maoz's research is the complex interaction of chemical, physical, and biological mechanisms affecting soil structure formation and deterioration.

December 6, 2021 - Hemp Micropropagation Using Alternate Growing Medium Componets and Comparison of Plant Vigor Outcomes by Genotype in Tissue Culture and in the Greenhouse

September 28, 2020 - Towards the Sustainable Intensification of Agronomic Crops

October 12, 2020 - Constraining the Mechanisms that Influence the Retention and Persistence of Fluorinated Organic Chemicals in Soil

November 16, 2020 - Challenges and Opportunities for Pest Management in Organic Vs. Conventional Agriculture: A Thrips Perspective

Glyphosate (Roundup) is the most widely used herbicide in the world, and is a key component of no-till systems throughout the world, especially in the Pacific Northwest. It is relatively safe, tightly bound to soil particles, is broken down by microbes, and does not have a long residual in the soil. However, there is concern about non-target effects, especially on beneficial bacteria and fungi in the soil.

With a next-generation sequencing approach, Paulitz and colleagues addressed the question: how does glyphosate affect soil microbes in the Pacific Northwest? Bacterial and fungal communities were found to be strongly affected by field location and cropping system, but glyphosate application had only a very minor role in shaping microbial community composition. More bacterial and fungal taxa were stimulated by glyphosate use than were reduced, a response attributed to the presence of dying roots, providing a greenbridge effect.

Dr. Paulitz is a plant pathologist who has spent his career on biological control and and cultural management of soilborne diseases, especially diseases of wheat.

February 23, 2018 - The Rodale Center and its Influence on Organic Farming Research

Jeff Moyer is a world renowned authority on organic agriculture. His expertise includes organic crop production systems with a focus on weed management, cover crops, crop rotations, equipment modification and use, and facilities design. Jeff is perhaps most well known for conceptualizing and popularizing the No Till Roller Crimper for use in organic agriculture. In 2011, he wrote Organic No-Till Farming, a publication that has become a resource for farmers throughout the world.

Jeff brings a farmer’s perspective and approach to issues in organic agriculture. He is a past chair of the National Organic Standards Board, a founding board member of Pennsylvania Certified Organic, the Chairman of the Board of Director of The Seed Farm, part of the Green America Non-GMO Working Group, a Project Member of The Noble Foundation’s Soil Renaissance project, and a Board Member of PA Farm Link.

In September 2015, Jeff was appointed as Executive Director of Rodale Institute after spending the last four decades at the Institute, helping countless farmers make the transition from conventional, chemical-based farming to organic methods.

Rodale Institute was founded in 1947 by organic pioneer J.I. Rodale to study the link between healthy soil, healthy food and healthy people. It is committed to groundbreaking research in organic agriculture, advocating for policies that support farmers, and educating people about organic food and farming.