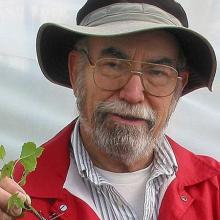 Clint’s contributions to horticulture include scientific research and extension that has had a broad impact not only locally, but nationally and globally.  His primary focus on addressing issues of critical importance to growers has resulted in solutions with global as well as local impacts.  Clint’s priorities have been shaped by growers needs rather than by a single commodity or academic discipline.

Potato, contributions to horticulture include
When potato growers in Malheur County, Oregon, faced processing product quality problems in the early 1980s, Clint found that the “sugar ends” were related to water stress, furrow irrigation, and the use of varieties with little tolerance to water stress.

To be able to test the levels of critical stress Clint ran extensive field evaluations of over a dozen types of soil moisture sensors.  He determined that granular matrix sensors (GMS), particularly the Watermark® sensor had readings that closely reflected differences in potato quality.  The GMS were particularly amenable for use in automated, replicated irrigation research with small incremental differences in irrigation criteria.  This pioneering work for use in research was recognized by the American Society of Agronomy in 2007.
Using GMS sensors and precision irrigation, Clint found that by carefully managing irrigation and measuring soil moisture, he was able to determine the point of soil moisture that was the threshold for the development of “sugar-ends” under different irrigation systems, research that was applicable to potatoes in many Pacific Northwest locations.

As potato producers have made better use of irrigation scheduling and adopted sprinkler irrigation, Oregon growers regained acres lost due to sugar-ends.  Less water was lost to runoff from sprinkler-irrigated fields and N fertilizer use was improved.  Clint’s solutions to the “sugar end” problem were recognized by the Oregon Potato Commission and Oregon State University in 2003.  Integrated with this effort, Clint has actively participated in a team of Pacific Northwest researchers who have bred, selected, and released 21 new potato varieties including many that are less prone to sugar ends.

GMS use
Clint introduced the use of GMS sensors and precision irrigation in his other research. Using these sensors, he developed optimal soil water potential recommendations for local potato and onion crops under different types of irrigation.  He is frequently consulted by individuals in other parts of the country and in other countries on how the technology could be applied to their situations, both for scientific research and field applications.

The GMS are feasible to use on family farms.  Following practices introduced by Clint, many growers have installed sensors in their fields to more precisely irrigate crops, particularly onions.  The variations in GMS reading closely corresponded to variations in potato and onion yield and internal quality.  Imprecise irrigation has substantial economic and environmental consequences from either over irrigation or deficit irrigation of water stress sensitive horticultural crops.  Using these GMS, growers have avoided unnecessarily frequent irrigations, saving water, and reducing downstream contamination.

Onion, drip irrigation, and groundwater
Growers faced the possibility of crippling restrictions from groundwater contamination from nitrate and DCPA residues that might be related to over irrigation and fertilization of onion and onion herbicide use.  Using optimal soil water potential and precision irrigation, Clint tested drip, sprinkler, and furrow irrigation for onion production.  He demonstrated that onions grown under drip irrigation had improved yield and quality with lower inputs of water and N fertilizer than furrow irrigation.  Results of the onion trials have been widely adopted by growers locally, in other production regions, and overseas.  Clint encouraged the use of herbicide alternatives to DCPA.

To find options for growers to make N fertilizer more efficient, Clint tested many nitrogen fertilization options for sugar beets, potatoes, onions, and wheat under different irrigation systems.  Nitrogen rates could be reduced for furrow- and drip-irrigated onion and for furrow- and sprinkler-irrigated potato.  Growers have modified their fertilizer practices using less N and more efficient timing, including split applications of N.  Growers are substituting sprinkler irrigation for surface flood irrigation of crops other than potatoes and onions.  Groundwater nitrate and DCPA residue contamination are decreasing through voluntary adoption of innovative practices.  These accomplishments have been recognized by the Oregon Department of Agriculture in 2008, the Hornaday Gold Metal in 2011, and the Onion Hall of Fame in 2012.

Specialty crops
Clint has done innovative research on Stevia rebaudiana (Stevia), Eriodictyon californicum (California Yerba Santa), several pharmaceutical crops, and native wildflower seed production.  Stevia selections with 16-19 % rebaudioside A have been identified.  He has identified cultural practices and superior genetic materials (> 10% leaf dry matter antioxidant content) for California Yerba Santa.  He is currently working on several pharmaceutical crops.  Native wildflower seed production research is being conducted for the Bureau of Land Management and the US Forest Service for use in revegetation following fires.  Using the cultural practice he has identified, some growers are producing seed.

Amazon revegetation
In the early 1970’s land and vegetation in the Amazon and other sensitive areas of Brazil were being disturbed at an accelerating rate along roads, construction sites and other locations resulting in radical erosion with no spontaneous healing.  These opening sores in the landscape were easily created where the rainfall is high and the soil is very shallow and the subsoil is highly acid and infertile.

Vigorous vegetation could stop erosion and legumes could help provide nitrogen on a regular basis to help stimulate new sod and soil formation.  Clint collected native and introduced species. Species were tested for effectiveness of revegetation individually and in mixtures.  Essential nutrient corrections and planting methods were determined.  Tropical legumes capable of fixing nitrogen and growing vigorously in very acid, infertile soils were identified to provide a continuous nitrogen supply.  Species were discovered that grew well including legumes that had not been previously used in tropical agriculture.  Vigorous vegetation was established and this vegetation has evolved through the present towards a natural native composition.  Research reports and a practical manual were written, allowing wide knowledge of effective practices.  Many legume collections were made and shared with germplasm banks in Brasilia and elsewhere. Detailed observations of natural plant succession, soil formation, and soil retention were made in 2013 confirming the early successes.  New journal articles are being prepared.